Aunty Ena at a family wedding

Aunty Ena, as she was known, was born on April fools’ day in 1907 and lived until 2006. Sadly, she just missed her 100th Birthday. She lived her whole life in the Black Country, Dudley Wood – an area known for chain making. Her family had a chain shop. Olwen Meller who now owns the tea set was her niece and Olwen is my mother-in-law.

She married her husband Ralph Parsons in July 1934. They had their wedding reception at Mushroom Green, pronounced “Musham”. It was a very hot day because Aunty Ena told Olwen that instead of having a stiff collar, the Minister’s collar was like a limp wet rag by the end! The tea set was a wedding present. It is stunning. The tea cups have a lovely shape and the floral design is very pretty. It is marked “Lawleys Regent Street”.

Aunty Ena and Ralph lived very happily in a house built by her brother in Mushroom Green. It had a wonderful garden, which my husband recalls had half a railway carriage including a gramophone, which was quite magical as a child. People travelled from miles away to see it. The area seemed more special by virtue of the contrast with the industrial feel of the rest of the area and Aunty Ena loved it there.

Sadly Ralph was killed in a car accident in 1953. Aunty Ena felt this loss terribly for the rest of her life. Although Aunty Ena no doubt felt very alone, her family rallied round and ensured that she played a major part in their lives. Although she had no children of her own, my husband has many happy memories of family holidays they spent together and of her constant willingness to play games with him. She was a much loved Aunt and Great Aunt. She saw so much change in her long life. She would be surprised to find she was on the Internet (or to know such a thing existed) and if I were to have told her of my plan to write about her and her tea set she would have told me not to be so “saft”.

When I said my Great Grandmother was the first into the vintage album I wasn’t being completely honest. Hers was the first photo I put into the album, but when I got it (Ebay)there was a random photo in the front. I am very intrigued now about the origins of the album. Can anybody help me date the album or this photo? Even better would be some information about the people in the photo, but I think that is a long shot. I wonder why the rest of the album was left blank. There is some damage to the rest of the album so maybe other photos were removed. For whatever reason, I am pleased I have this little clue to its past.

They are not drinking tea in the photo, but they look like they would enjoy a cup so they can certainly stay where they are. 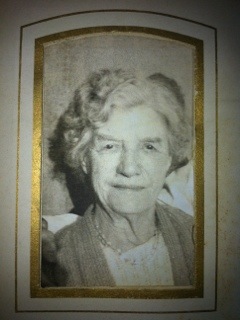 It is only right, given that this is my blog, that the first tea set I should feature is the one I have been given which belonged to my Great Grandmother. Gertrude Annie Thorn was born in Exmouth in 1891. … END_OF_DOCUMENT_TOKEN_TO_BE_REPLACED